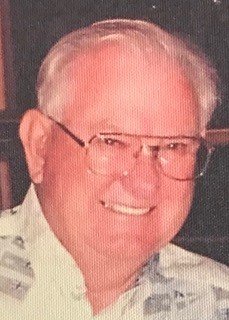 A.P. grew up west of town with his sisters and brothers and walked to school at Union Grove. He graduated from Knox City High School in 1947 and from Midwestern State University in 1951 with a BS Degree in Animal Husbandry. A.P. also married Nola Faye Wilhoit in 1951. He was drafted into the U.S. Army and served in Korea during the Korean War. There was an offer get out of the Army early if the soldier would go to school. So, A.P. took advantage of the offer and went to Texas Tech where he did his student teaching and got his Smith Hughes Degree.

A.P. got a job with the Civil Service where he had a career as an instructor at Gary Air Force Base in San Marcus, Shepard AFB in Wichita Falls and Lowry AFB in Denver, CO. He taught electrical systems on helicopters and bomber aircraft, in-flight refueling systems and weapon delivery missile systems.  He retired as an Instructor Supervisor, and they moved to Parker, CO. They were active in the Church of Christ all their married life and were instrumental in building the Church in Parker.

A.P. and Faye had four children that they raised in a Christian home. Following the family tradition, they worked hard and took part-time jobs to save the money to send them to college.

After Faye died from complications of asthma, A.P. moved back home to Knox City where he bought the family farm and grew hay and grazed calves. He married Kay Stewart in 2001, and they enjoyed many years of traveling—RVing, touring, cruising, shopping, boating and visiting.

Online condolences can be shared with the family at www.smithfamilyfh.com.

Crappie Tournament at Miller Creek May 21

Fossils on display at MHS