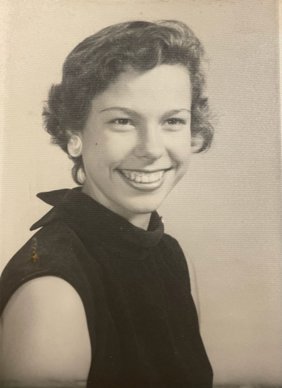 Glenda Gayle (GG) Givens Headen (March 4, 1940 – June 21, 2022) was known by GG while growing up in Knox City.  When she married and moved to Plano she became “G”, although her grandkids proudly called her GG. Knox City was her home until her mom “made her go” to Ranger Jr. College.  She started school in August, met “CD” (known as Drayton then), got engaged within three months and married on Feb. 19, 1959. They were married and lived in Plano for most of those 51 years until he passed in April of 2010.

Anyone who knew her, knew she was a force. If there was a project that needed completed, she was your girl.  She always said, “you can sell anything you believe in!”  She earned a car in Tupperware before she was 25. She recruited countless people into the world of Barbershop. If you could sing at all, you didn’t have a choice but to “attend at least one rehearsal” for the Vocal Majority for the men or Greater Dallas or Richtones for the women. Once there, she knew you would be hooked.  She traveled all over the US to teach how to recruit. She truly was amazing and devoted countless hours to her projects. In her later years, she worked tirelessly “for the troops”. Working with other women, they started with pocket bears for the troops to hand out to frightened children overseas. General Petraeus sent her a signed picture of him handing out her bears. They added neck coolers, helmet coolers, and crocheted hats and soap on a rope soon after.

You never had to wonder what she was thinking. She told you – the good, the bad, and the ugly. We believe it made us better.  All four of her kids think “they are boss” and we are all the better for it. She was famous for her favorite word – sh#+.  She walked fast and thought faster. We called it the “GG walk”. We know she is dancing the jitterbug, 2-step, swing and many others with dad, her mom, sister Jackie (who passed 12 days before her), and so many friends, uncles and aunts.

She will be sorely missed by her kids: Skip (Wendy), Holly, Amy (Randy) and Emily (Scott), her grandchildren: Kayla (Zach), Madeline, Lauren, and Chandler, her great grandchild Penelope, and her cousin Kay Holley.  Kayla pointed out that GG will get to meet the newest great-grandson before we do. He will arrive in January. Her nieces and nephews and friends will miss her as well.

We will have a “Celebration of Life” on July 24, 2022 from 3-5 p.m. at the old Dallas High School (Crozier Tech) in downtown Dallas (2218 Bryan Street – there is a Dart stop right in front). Free surface parking in the back.