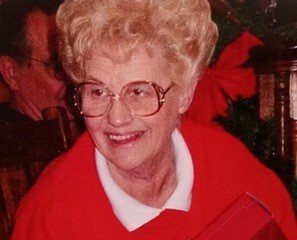 Vondell Reed Reynolds was born on Sept. 18, 1931, in O’Brien.  She passed from this earth into the presence of her Lord on April 22, 2022, in San Pedro, CA at the age of 90. A graveside service will be held today at O’Brien Cemetery, at 11 a.m., with Bob Cameron officiating, under the direction of Smith Family Funeral Homes.

Vondell spent the first half of her life in Texas and then moved to California when she married the love of her life, Bill Reynolds. Between them, they raised nine children.

Vondell was a master of all trades.  In addition to raising her family, she began a career as a hairdresser, which ultimately resulted in her owning and managing her own beauty salon.  She later spent the last part of her life as an independent lingerie salesman for Cameo Coutures.  She was affectionately known as “The Bra Lady” in an article which ran in the L.A. Times.  She was an accomplished pianist, loved bowling, and was famous for her homemade jams.  She was also a devout Christian, and for many years played the piano for her church.

She was predeceased by her loving parents S.N. and Pearl Reed; sisters Floyce Leach and Bea Ellis; and grandson Mark Mayes.

Online condolences can be shared with the family at www. smithfamilyfh.com

4th of July Thing in Munday